The senior book club met last Thursday to discuss the different books the members had read over the Christmas holidays and to choose a the first book of 2015.The group have decided on ‘The Magicians’ Guild’ written by Trudi Canavan. New members are welcome at any stage and you at home are invited to read along with us. 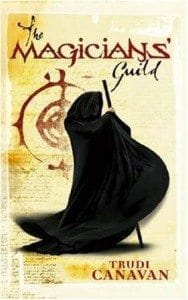 Book 1 of the Black Magician Trilogy

Each year, the magicians of Imardin gather together to purge the city streets of vagrants and miscreants. Masters of the disciplines of magic, they know that no ordinary lowlife can oppose them. But their protective shield is not as impenetrable as they think. Sonea, angry, frustrated and outraged by the treatment of her family and friends, throws a stone at the shield, putting all her rage behind it. She is amazed when it sails unrestricted through the barrier and knocks a magician unconscious.

The Guild’s worst fear has been realised. There is an untrained magician loose in Imardin who must be found before her uncontrolled powers can destroy herself and the city.

Trudi Canavan is the author of the bestselling Black Magician trilogy—The Magician’s Guild, The Novice, and The High Lord—as well as Priestess of the White and Last of the Wilds, Books One and Two of her Age of the Five trilogy. She lives in a little house on a hillside, near a forest, in the Melbourne suburb of Ferntree Gully in Australia. Her first published story received an Aurealis Award for Best Fantasy Short Story in 1999. A freelance illustrator and designer, she also works as the designer and Art Director of Aurealis, a magazine of Australian Fantasy & Science Fiction.