Great outing for First Year Boys in their first outing in a Futsal tournament. The boys went right through to the finals where they wre narrowly beaten by Mounthawk. 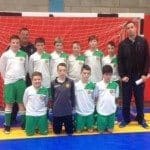