Last year St. Brendan’s as a second year group decided to raise funds for the Donal Walsh Live Life Foundation as part of their CSPE project. They invited Elma Walsh Donal’s mother to speak to the student of the school. Donal Walsh touched so many lives through his love of life and his fundraising while he lived and his Mother Elma continued that legacy when she spoke to our students on the day. Elma was kind enough to invite St. Brendan’s to attend Donal’s Anniversary in Tralee on Thursday May 12th. The students attended the ceremony with Ms. Fitzgerald and Sr. Frances and once again were inspired by the life of the young man who has inspired so many. 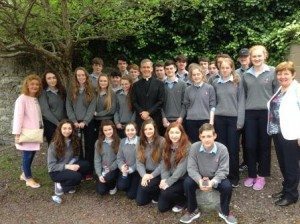