Monday morning, we set out for Dinân which took around an hour. We were told to sit with our French correspondents so this bus ride was noticeably quieter than the previous ones. In Dinan we saw the old town with its narrow streets and cobblestone everything! We visited the basilica and saw the dungeons of the Castle which had a view of the town and of the boats on the river that runs through the town. Then we had our lunch in the park, which hosted some pretty strange looking toilets before we got back on the bus to go to a shopping centre.

-Brenda O Connor (TY1)
Today on our french trip we went to Dinan. We first went for a tour of the historic features of the town like the castle and its defensive towers. We had lunch in a park and after that we headed to a shopping centre. We had to spend most of our day on the bus though as it was one and half hours drive to there and back. Jack O’Neill 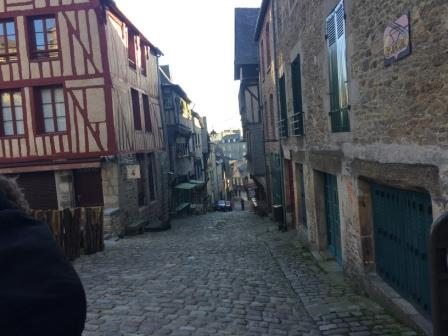